The mobile apps market is relatively young, but it has grown dramatically over the last few years. Its active development in all parts of the world is fuelled by the rapid growth of the mobile device market and integration of mobile technologies into all spheres of private and public life. Today, mobile apps form one of the most investment-attractive market segments.

Although Russia's mobile market is considerably smaller than those of the US, Asia and Europe, many experts share the opinion that it has a significant growth potential. According to the research by J'son & Partners Consulting , in 2013, the volume of the Russian mobile apps market totaled approximately USD246 million (EUR180 million), and analysts expect it to keep on growing. The research reveals that more than 50% of tablet and smartphone users run video apps every day, surf the Internet at least once a day, and play mobile games daily. It is also reported that 40% of mobile Internet users would rather be deprived of television than of their smartphones.

According to this report by AppAnnie, Russia occupies 5th place in the total number of iOS downloads, topped by the USA, China, Japan and the UK. The same report shows that Russian's Android downloads are in 4th place after the USA, India and Brazil. However, on closer inspections of the revenues brought in by iOS and Android apps, it becomes apparent that Russia is yet to reach its full potential, as it occupies 10th and 9th places, respectively.

Despite the recent slowdown of Russia's economy, forecasts concerning its mobile market are rather optimistic. According to the forecasts by J'son & Partners Consulting, in 2015, the Russian mobile apps market is expected to grow at an average rate of 186%, and in 2016 it is likely to reach USD1.3 billion. The growth will be driven by such factors as the increasing number of mobile devices, fast development of 4G networks and the general shift of consumption and communication habits towards mobile (e.g. mobile shopping, development of mobile banking and mobile payment systems, the spread of mobile social networks and mobile messengers, growing popularity of geolocation services, etc.).

Russia's mobile ecosystem is now experiencing deep changes due to the recently introduced principle of technological neutrality. In short, this allows more players to enter the mobile telecommunications market, which had previously been monopolized by three major operators. As a result of increasing competition, the quality of services is improving, and prices are declining gradually. Moreover, mobile operators are now legally bound to provide coverage in all towns with a population of 1000 or more, in order to obtain or extend their licenses. According to recent research by eMarketer, the mobile penetration rate, which was 80% in 2014, is likely to increase by 6% by 2017. The number of mobile Internet users in Russia is expected to increase from 61.5 million in 2014 to 88.1 million by 2017. 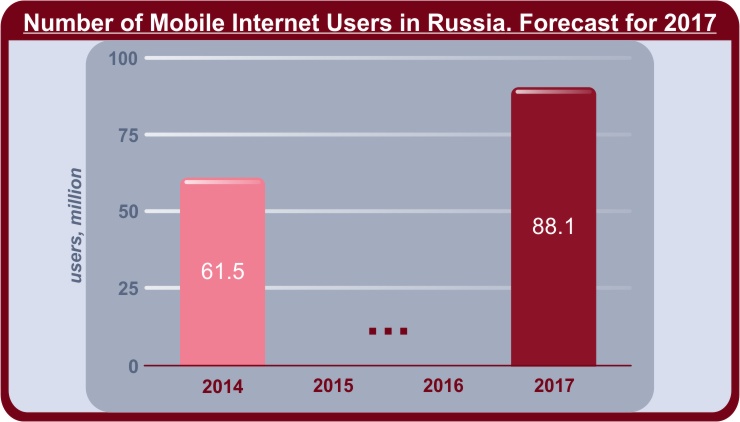 2014 was marked by a sharp increase in the sales of smartphones: 26 million devices were sold in Russia, which is 47% more than in 2013 (data published by J'son & Partners Consulting). В Smartphones constituted 61% of the total 43 million handsets. However, it should be noted that the overall market growth has been registered due to the increasing sales of budget smartphones ($50-$110), while other mobile market segments are slowing down.

In monetary terms, Russia's smartphones market increased by 20%, and its volume comprised 216 billion rubles (3.3 million dollars). The primary growth factors include the rising popularity of mobile Internet and the decreasing average price of smartphones by 19% and totaled about $130 in 2014. According to estimates of J'son & Partners Consulting, by 2018 Russia's total smartphone market will reach 39.9 million devices. 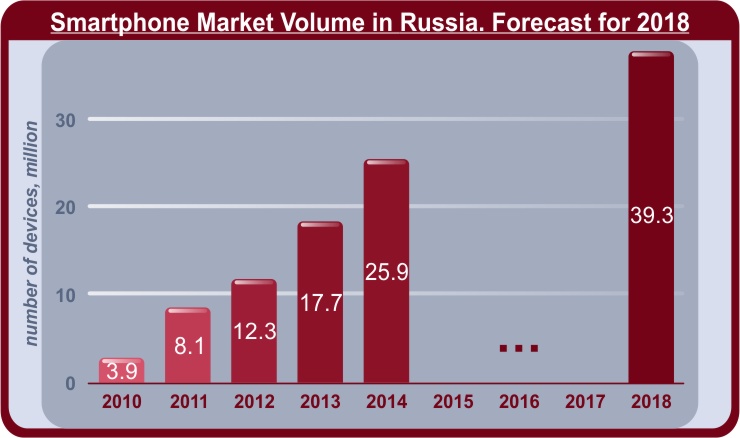 As for the tablets market, 9 millions devices were sold in Russia in 2014 totaling USD1.2 million (estimates by major mobile retailer Svyaznoy, based on market data by GfK). Though the number of devices increased by a third as compared to 2013, there was no market growth in monetary terms, since the demand had moved to affordable-priced tablet models (up to $80). 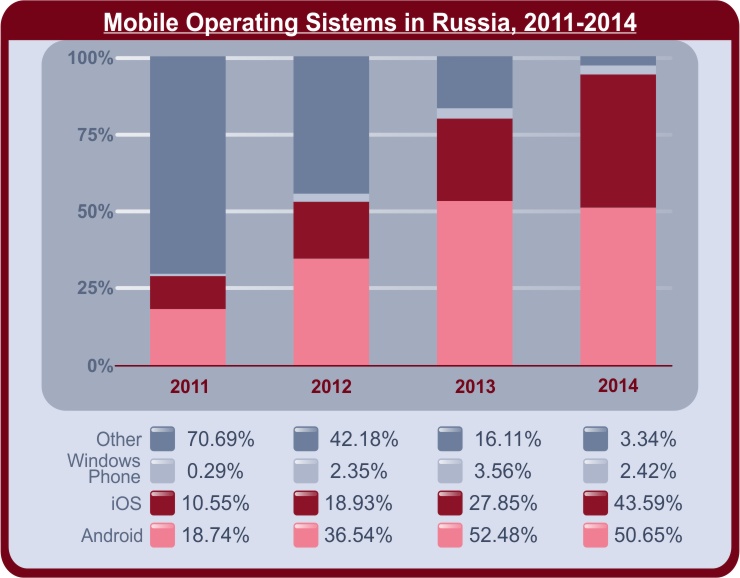 The marketing research report by Mail.Ru Group and Newzoo states that the number of mobile gamers in Russia was 33.8 million in 2013, which comprised 79% of the country's total number of gamers. However, only 28% of them paid for their game experience. According to this report, the growth rate of Russian mobile games market is quite astonishing: its value comprised $55 million in 2011, $99 million in 2012, and $165 million in 2013. And J'son & Partners Consulting predicts that by the end of 2016, the Russian mobile market will reach $707 million. Such active growth is driven by the rising popularity of smartphones and tablets, the decline in their average price and increasing 3G and 4G coverage. 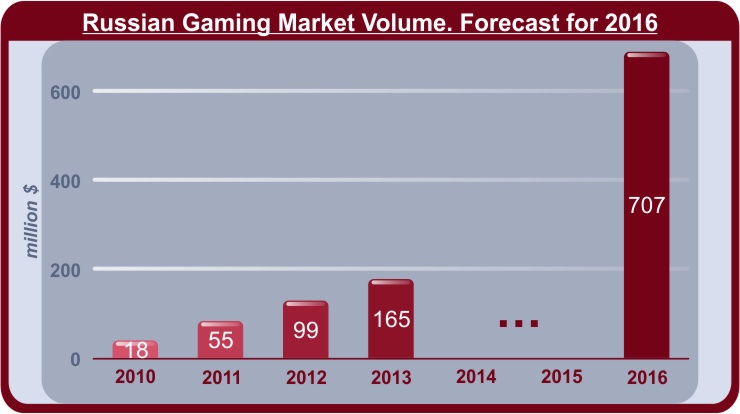 Russian mobile gamers who prefer Android over iOS spent approximately 40.8 minutes per day in January 2014 on their gaming sessions, which is 4.6 minutes higher than average, according to the Gaming: The Language of Franco Mobile report by Flurry. The report places Russia in 3rd place, with Germany and the USA taking 2nd and 1st places with 47.1 and 51.8 minutes, respectively. The most popular game categories among Russian Android users, according to this report, are Casual Games (56% of all Android sessions) and Arcade&Action (29% of all Android sessions). With the percentage of Android users engaging in at least one session of Casual and Arcade&Action game being 69% and 64% respectively, these categories are established as the most promising for approaching the Russian market.

Monetization in the Russian Market

According to Distimo's report published in February 2014, the freemium business model is the most widespread on the Russian market of mobile apps. They generate 76% of the total revenue, while paid apps without in-app purchases (IAP) are responsible for 20%, and paid apps with IAP hold the humble share of 4%. The average revenue per download (ARPD) in Russia is $1.30 (App Store, Top Overall, January 2012 - January 2014), which puts this country in ninth position in the global ARPD rating.

Most mobile apps and services currently available on the Russian market are concentrated in the following segments: social media, geolocation, games, music, news, content projects, and transportation services. At the same time, there is a discernible lack of municipal and tourist mobile services, and underdevelopment of full-featured online shopping (information by Componentixstudio).

Entering the Russian market almost inevitably involves localization. In fact, most Russians tend to ignore or quickly delete an otherwise useful, but unlocalized app simply because they do not want to struggle through its hardly comprehensible interface. The sociological research conducted by Levada Analytical Center in 2014 in 45 regions of Russia revealed that 70% of the Russians do not speak any foreign languages. 11% of the Russians speak English quite fluently, while only 2% can speak German or Spanish. Research by Common Sense Advisory, an international analytic company, conducted in 2014 in several non-English-speaking countries including Russia, revealed that 87% of consumers who cannot read English will not buy products or services on English-language websites.

Local business partners can be of great help. Their expertise in local market peculiarities, as well as profound knowledge of language and culture, will prevent marketing mistakes. They can also handle administrative issues, which can be tricky for non-residents.

Reviews and press releases published by popular Russian-language tech blogs and websites usually result in a quick boost of downloads, but they cannot be a stable long-term traffic source. It is a good tactics for initial app launch, but after that, it is necessary to stimulate the audience's interest via social media. Local social networks offer good opportunities to promote an app through app-install ads, user groups and public forums. Compelling content (funny videos, demotivators, useful tips, etc), which can go viral and generate a lot of buzz, attracts lots of followers and increases the number of installations, but for a better effect, all the content should be in Russian. The most popular social networks in Russia are VKontakte, with the monthly audience of 57 million users, Odnoklassniki with 43 million, and Moi Mir with 31 million. Global social networks Facebook and Twitter comprise 25 and 12 million users, respectively.

Android smartphone users from Russia can download apps from Google Play, and from alternative app stores. Publishing and promotion in such stores increases the app's chances of getting noticed, because there are considerably fewer applications to compete with than on Google Play.

The largest Russian alternative Android store is Yandex.Store run by Yandex, a Russian Internet company which operates a popular search engine. Its advantages include a Russian-language interface, support for mobile billing, comprehensive anti-virus protection for its 100,000+ apps, and integration with Yandex.Money, a widely used online payment system. Yandex.Store is pre-installed on devices by Oppo, Explay, teXet, Lenovo, Huawei and Nokia X smartphone series. MegaFon, one of the "Big Three" mobile operators of Russia, opened its own app storefront, GetUpps! on the base of Yandex.Store, but with special offers for MegaFon subscribers.

5 Things to Consider Before Approaching the Russian Market:

The Russian mobile market is relatively young, with many underdeveloped segments. At the same time, it shows steady growth dynamics backed by rapidly increasing mobile penetration. Consequently, there are many opportunities for a developer to occupy a profitable niche.

More than two thirds of mobile devices in Russia run on Android, and its popularity is steadily growing. The prospects of iOS in Russia are dubious due to Apple's decision to raise iPhone ruble prices by 70% in December 2014. Windows Phone has not won any significant market share.

To succeed in the Russian market, an app should be adapted and localized, because the vast majority of Russians ignore foreign-language apps. Russian business partners can render valuable assistance with regard to localization and marketing strategy.

Russian social networks provide powerful promotion opportunities, such as app-install ads, viral content in public and user groups, and in-app share buttons. Reviews on local tech websites can generate a boost of interest but ought to be backed by a consistent advertising campaign.

Alternative Android markets (Yandex.Store and others) are less competitive than Google Play, and provide better chances to get noticed.